Woven in England since 1720

The history of Stephen Walters & Sons Ltd starts in Spitalfields, London at the end of the 17th century. 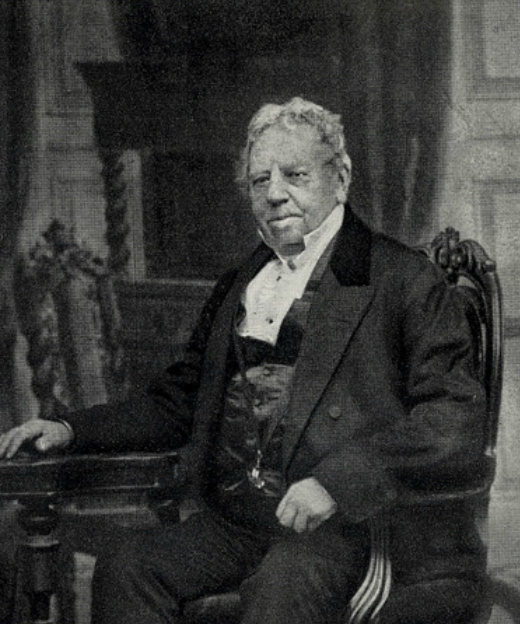 Stephen Walters (1778-1864) the grandson of the founder Joseph Walters

The city had recovered from the ravages of the Great Fire of London in 1666. Commerce was flourishing under a system of Livery Companies and Guilds. Artisans and craftsmen, many of them Huguenots, were bringing new skills from Europe. Apprentices would typically work for from age 14 to 21 to master the skills, learn the guild’s secrets and earn the right to establish themselves as journeymen or master craftsmen.

Benjamin Walters (born 1697) had completed his apprenticeship and was a weaver in Paternoster Row, Spitalfields by 1720. He married Mary Darwent in 1722. Their second son Joseph I (1725-1782) went on to become a Master Weaver of the Worshipful Company of Weavers, London’s oldest recorded city livery company.

Walters and Darwent are listed as mercers of Ludgate Street by Kent’s London Directory in 1753. This would suggest that Joseph I had also established a mercers company in partnership with a relative from his mother’s side of the family.

Unusually, his son Joseph II (1747-1834) did not serve his apprenticeship with his Master Weaver father. Instead Joseph II was apprenticed to the influential John Dubois, a Hugueno 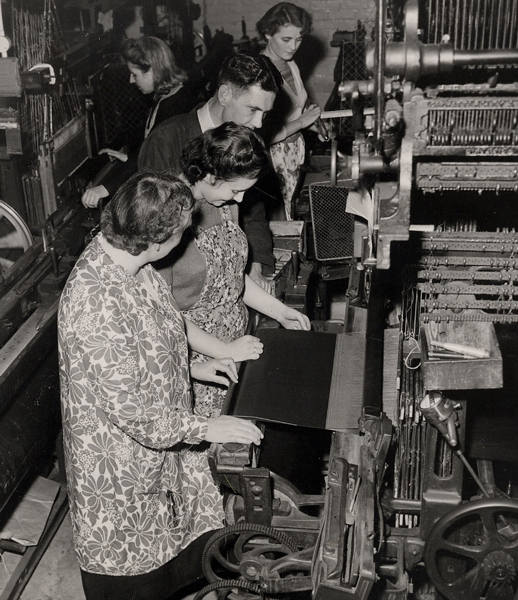 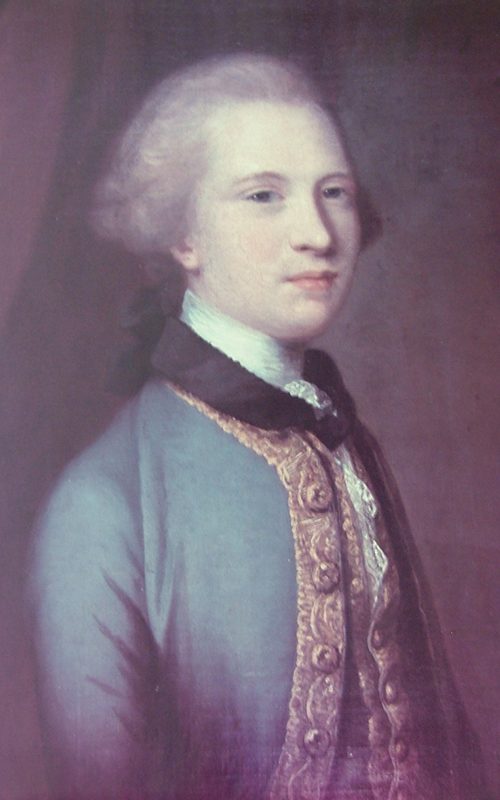 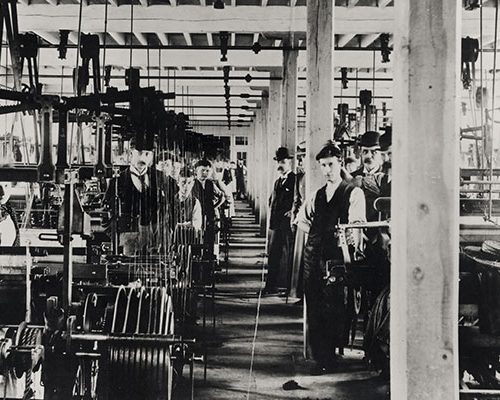 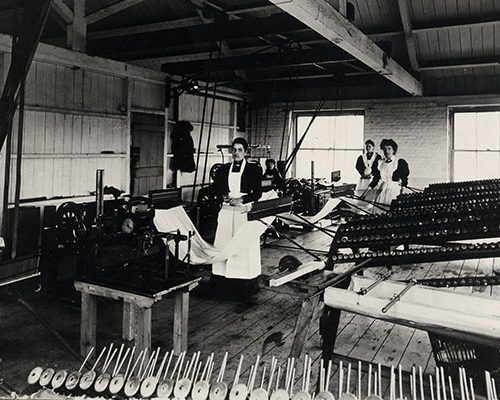 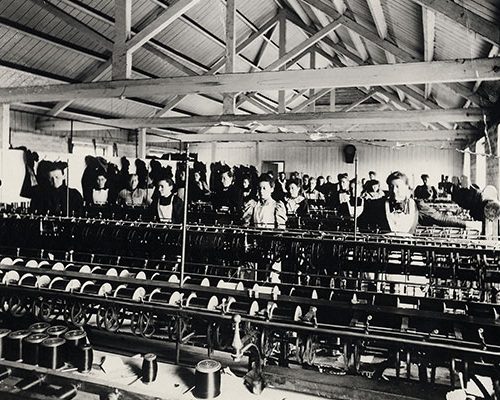 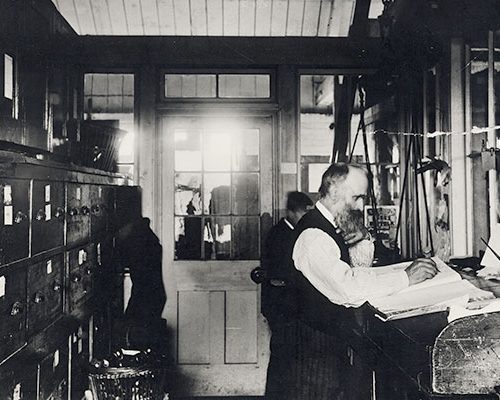 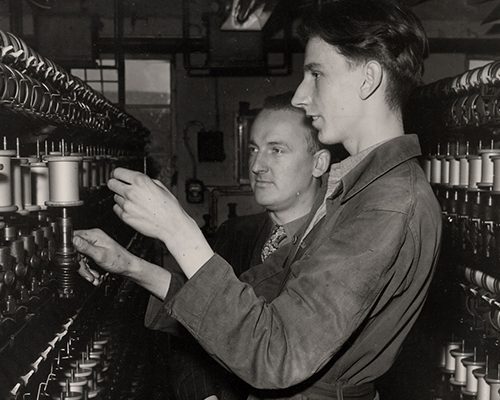 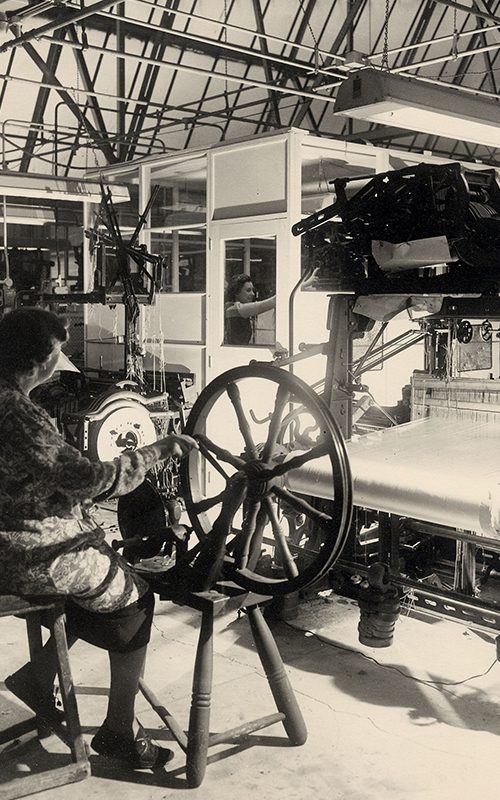 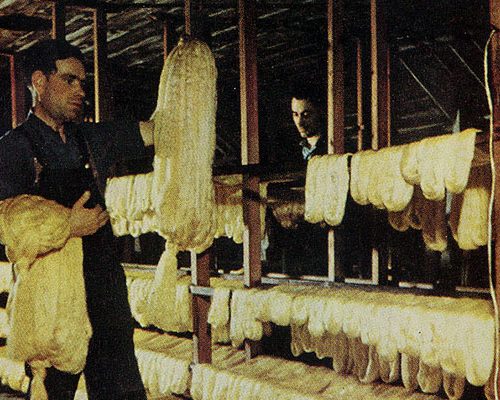 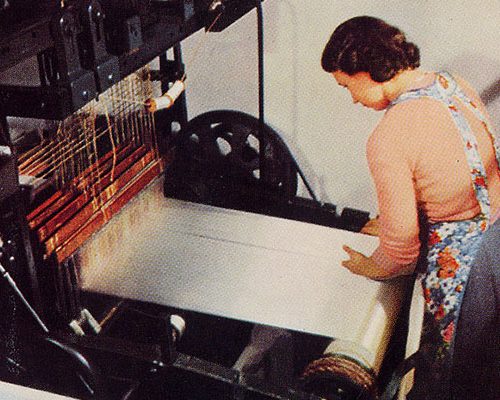 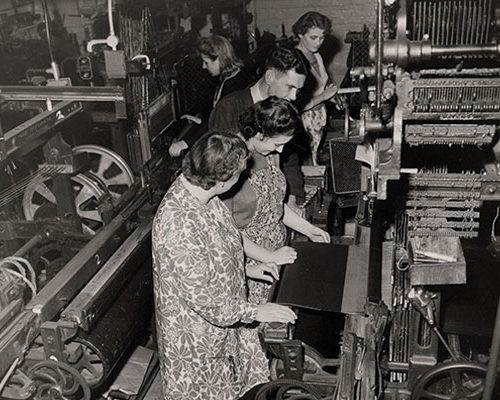 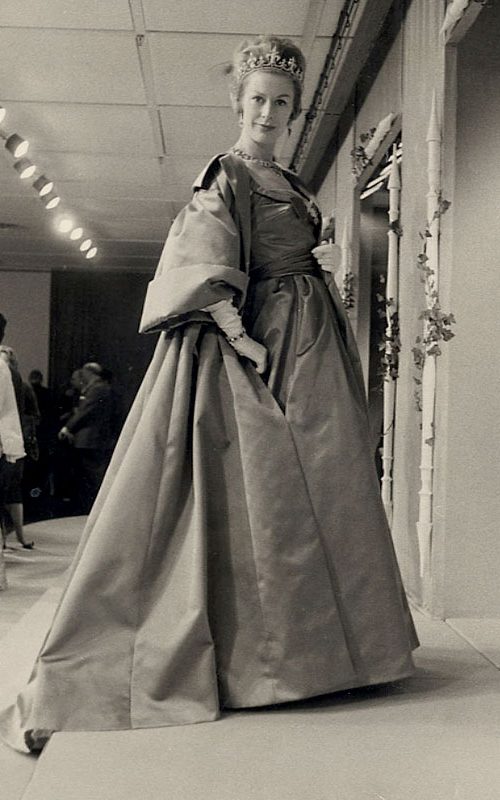 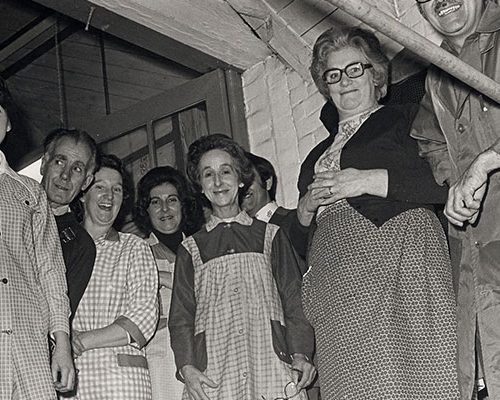 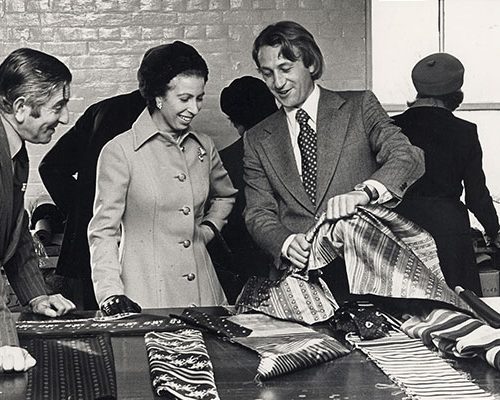 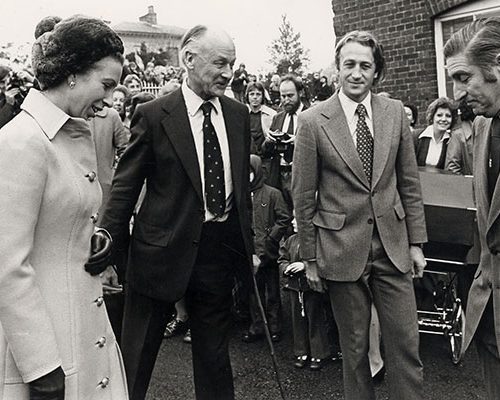 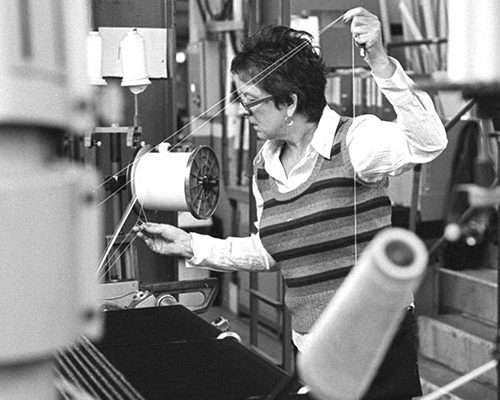 Both Joseph II and his brother George (1750-1809) joined their father and produced draw loom woven fabrics for dresses, brocatelles and damasks for furnishings. They lived and worked at 25 Wilkes Street. This could reasonably be claimed as the first address of the company that would become Stephen Walters & Sons.

Three of Joseph II’s sons followed the family silk weaving tradition; Joseph III (1774-1854), Stephen (1778-1864) and Daniel Walters (1790-1876). With three sons in the same business and with the company’s growing prosperity, the premises at Wilkes Street were no longer sufficient. In 1809 they moved to Bow Lane, a more prestigious address just inside the walls of the City of London.

This was the first in a series of significant moves. By 1825 Joseph and Stephen had established J. and S. Walters of 15 Wilson Street, Finsbury producing dress silks while Daniel specialized in weaving silks and velvets for the furnishings trade at number 14.

Before they had divided the business Stephen and Daniel had expanded the business further by leasing a building in Braintree, Essex in 1822, followed by another factory in Kettering, Northamptonshire in 1824. They benefited from the weaving skills available due to the declining wool industry and from the latest production technology. Jacquard hand looms were widely used in the 1820s but the first power looms were introduced at the mill in Kettering.

Stephen also built other mills in Suffolk; in Haverhill in 1828 and in Sudbury in 1860, where he began weaving fine umbrella and parasol silks with the help of his son Alfred I (1822-1913). The World’s Fair exhibition in London 1851 was a great boost to British manufacturing as were the improved transport links with the development of the region’s railways in 1840-1860.

Alfred II (1852-1937) bought the factory at Sudbury Silk Mills in Suffolk in 1900 and consolidated the weaving operation there. We remain on that site today. Bernard joined the company in 1900 and ran the sales offices which remained in Cheapside, London until the 1940’s.

In Sudbury the company continued to prosper, weaving a range of fabrics from black mourning crepe during the reign of Queen Victoria, to umbrella and parasol silks and even parachute silk in the 1940s. During this time Bernard’s sons Peter (1915-2011) and his brother John (1913-present) introduced a range of new fabrics including Spunella for ladies dresses, tuxedo facing fabrics and repp stripes for neckwear. They also held special commissions for ceremonial occasions such as the robe and coach for the coronation of Queen Elizabeth II in 1953.

David Walters (1942-present), the son of Peter, pioneered the next step forward with the introduction of rapier jacquard looms in 1964. While the company primarily specialised in neckwear and was beginning to re-introduce fabrics for home furnishings, it continued to be commissioned to weave dress fabrics for couturiers and other special occasions. These included the gown for the investiture of Prince Charles in 1969, the wedding dress for Princess Anne in 1973, the Alexander State Coach and the wedding dress for Lady Diana Spencer in 1981. Julius Walters (1971-present) is the latest generation to join the business. Today Stephen Walters and David Walters Fabrics aim to uphold the tradition of producing fine fabrics, woven with integrity in England and to continue to develop new qualities and designs to anticipate the needs of an ever evolving marketplace. David Walters Fabrics now specialises in bespoke high-end fabrics for interiors and home accessories.

Based on research by Liz Trenow. 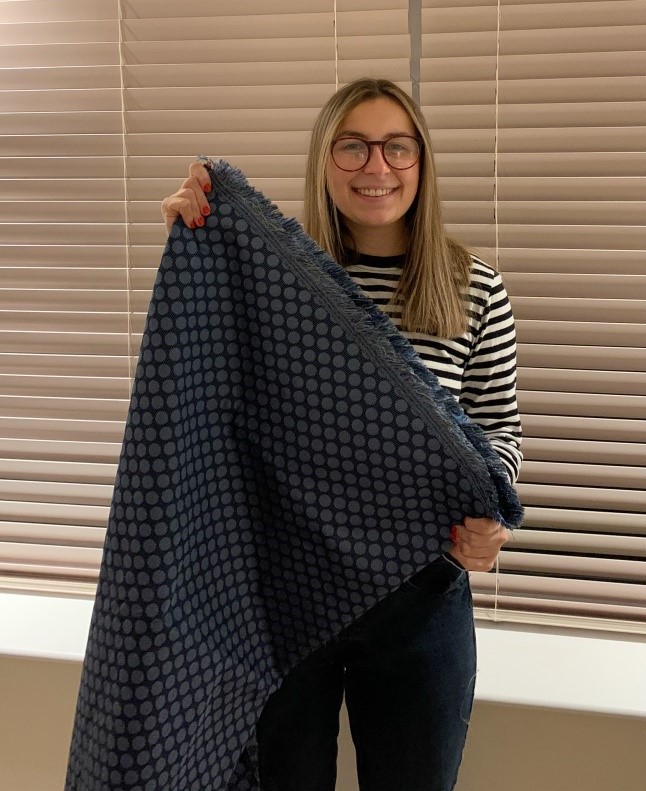 By SWadmin | News
Congratulations to Hannah Balshaw from Nottingham Trent University for creating the 2021 winning design which is included in our Spring / Summer 23 Apparel Collection. The brief was to create...
END_OF_DOCUMENT_TOKEN_TO_BE_REPLACED 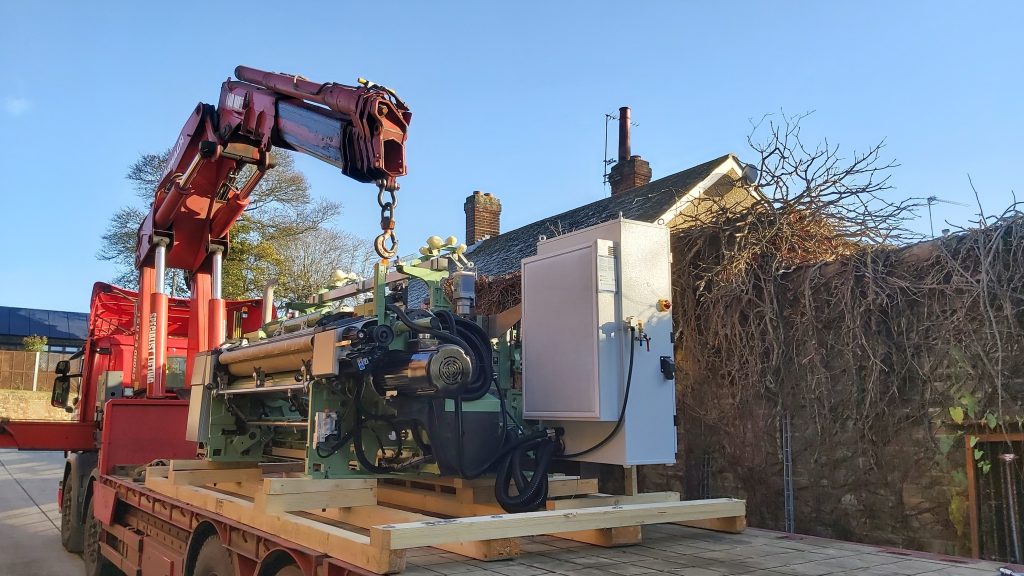 By SWadmin | News
Stephen Walters are delighted to be the first UK mill to introduce the Dornier P2 rapier weaving machine to their collection of looms.  The Dornier P2 is the new generation...
END_OF_DOCUMENT_TOKEN_TO_BE_REPLACED